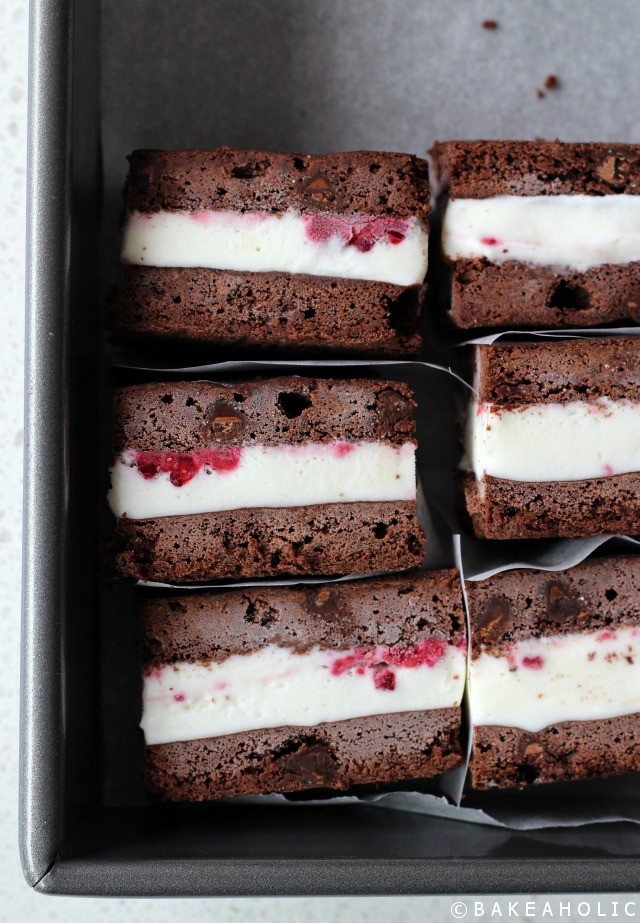 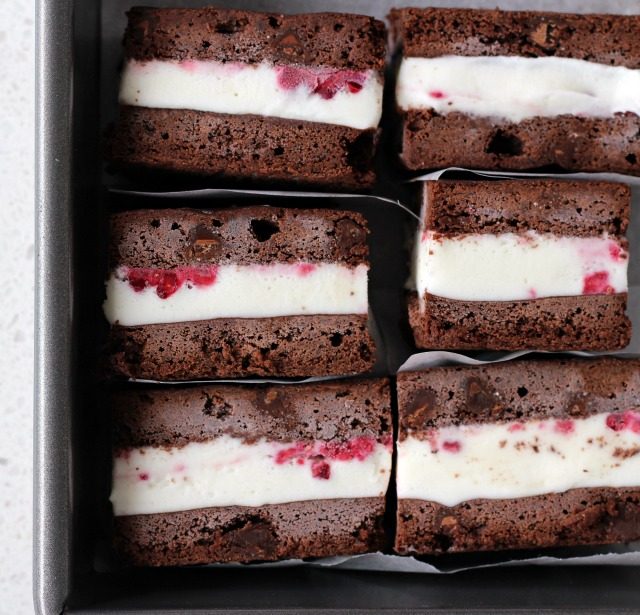 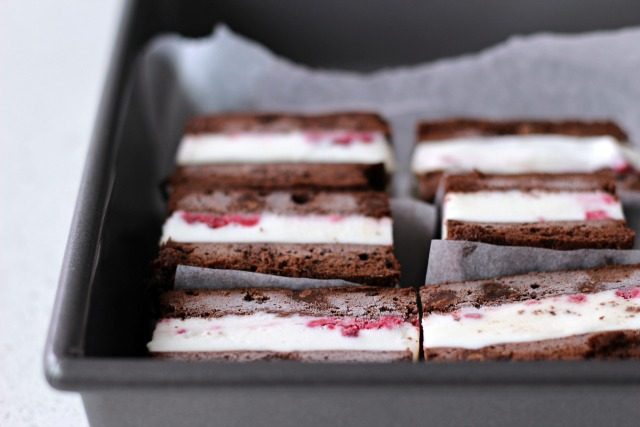 If it’s as hot as it is here where you are, you’re going to want to cool down – enter these Brownie Ice Cream Sandwiches.

A major heat wave hit Vancouver this summer and it feels never-ending. It’s one of those ‘when was the last time it rained?’ summers, which is kind of becoming the norm for us now.

Last summer, I was (super) pregnant during the heat wave and was counting down the days until Evelyn was here so that my feet weren’t the size of a clowns. I’m thankful this summer that I’m not pregnant, however I do have an *gulp* almost one-year-old that I have to run after, and keep entertained, in the shade. HOW has it been a year? I have NO idea. Time goes way too fast. She’s not a baby anymore, she’s an ice-cream-sandwich-eating one year old. I’m planning her first birthday, and baking up some treats for her too.

I know come fall we’ll all be complaining about the rain, but for now if you want to stay cool I highly suggest making a batch of these Brownie Ice Cream Sandwiches. I had the idea last week, and knew I had to make them for a BBQ on the weekend. What’s a summer BBQ without an ice-cream treat?

I took my basic Black Bean Brownie recipe, made it in a larger pan (although, I was surprised at how thick they were still!) and then sandwiched some fro-yo in the middle with some raspberries. A summer must. 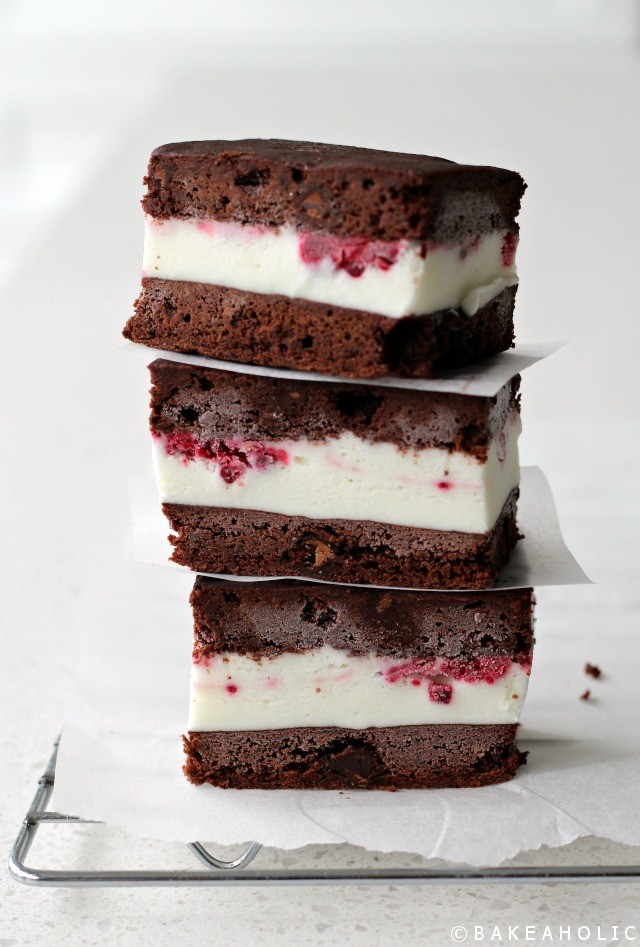 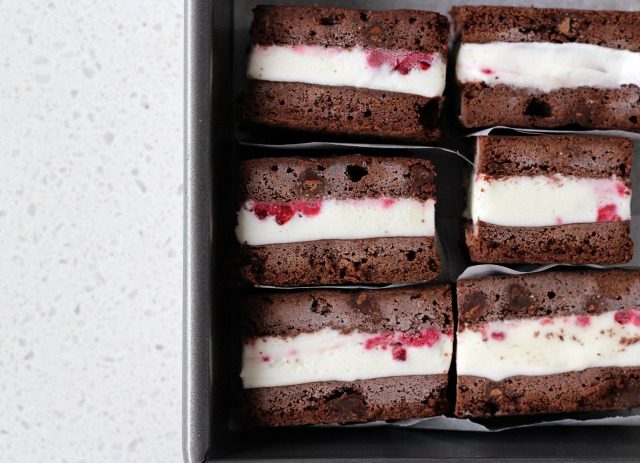 A summer treat to keep you cool.

1. Pre-heat oven to 350 degrees F.  Line 9 x 13 inch baking dish with parchment.
2. Prepare the Black Bean Brownie batter, in high-speed blender or food processor. Blend until silky-smooth.
3. Spread evenly into 9 x 13 inch baking dish with spatula.
4. Bake for 15-16 minutes, until set but not over-baked.
5. Remove from oven.
6. Allow to cool to room temperature.
7. Freeze brownies, uncovered for an hour.
8. Once chilled, remove from freezer, along with ice-cream and raspberries.
9. Remove brownies from baking dish with parchment paper. On a cutting board, cut brownies in half down the middle (so you have two equal rectangles) Place one aside, and leave one half on parchment. Return to baking dish.
10. Lighlty swirl together the thawed ice-cream and frozen raspberries and spread evenly onto half of the brownies. Replace other half of brownies on top of ice-cream, and press down softly.
11. Place back in freezer to set, overnight is best but a couple hours at minimum. Once ready to slice, allow to thaw a couple minutes and slice evenly into squares or rectangle sandwiches. Store in freezer bag or tupperware until ready to eat. 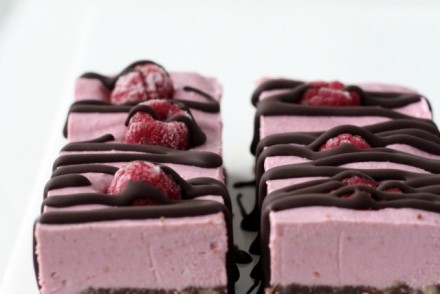 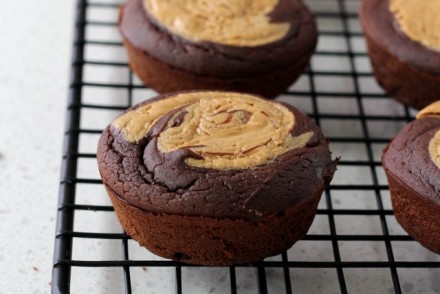 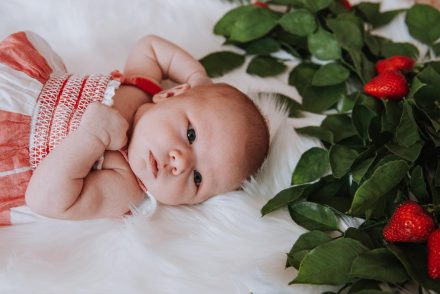