This weekend we’re celebrating Thanksgiving in Canada, which is sort of unbelievable to think we’re already into October.

{A gorgeous afternoon walk in the park with Lainey}

The weather since September has been amazing. The mornings are slightly chilly, but by the time I get to my car after class at three, it’s an oven (no pun intended 😉 The weather has made the afternoons seem extra long, being able to go outside and enjoy it longer.

Also, I can’t believe I have been in school for five weeks already. The time has gone by really fast, I think partly because our program is quite enjoyable and completely different than the various courses I have had to take in the past for my degree. We have a group of 30 students in our module, and we all get along really well. When I was working towards my degree I would have three or so classes a day, in different rooms, with different instructors, different students (who you really don’t get to know that well in a lecture hall), and numerous assignments due for each. This is a refreshing change – we are given time to reflect, work in groups on a daily basis and really interact with each other. Next week we’ll all be going separate ways for two weeks are we move into our elementary schools or high schools for ‘observation.’ I thought I would bring something to class for our last day before the long weekend, and since we won’t be seeing each other for a bit. It turns out a few couple other people had the same idea – We had brownies, cookies, and Tim Horton’s doughnuts. I guess we all needed a slight sugar-buzz on a Friday.

My mom’s out of town this weekend for my cousin’s wedding so we’re having a late thanksgiving dinner next weekend, and Adam and I are having our thanksgiving dinner with his family on Sunday! So excited for turkey dinner, especially leftovers. Hope everyone has a great Thanksgiving weekend! Full of turkey, pumpkin pies and family. 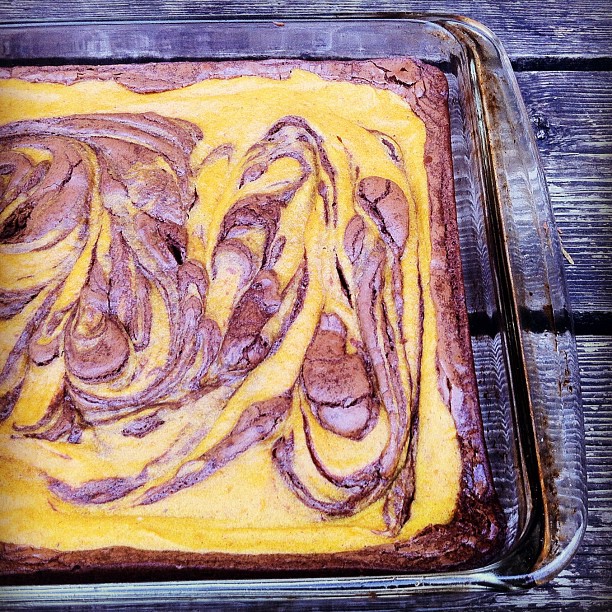 I’ve seen these brownies before on other blogs, but this is the first time I’ve made them. They are a brownie/pumpkin pie mutant. The brownie is fudgey and densely chocolate, and the pumpkin is like a pumpkin pie. The flavours actually work well together, and I got some ‘positive feedback’ (mind the teaching lingo) from my fellow students =) These would be great to bring to a Thanksgiving dinner this weekend, because they’re easily portable. I stored mine in the fridge overnight because It sets the pumpkin like a pie, but also makes the brownie really fudge-like. You can eat them at room temp, or cold.

If you’re not a fan of pumpkin pie, these are a yummy alternative! 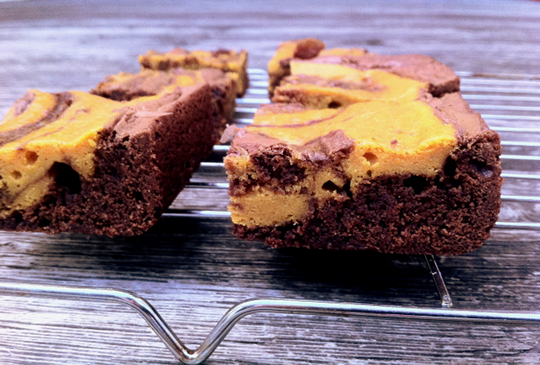 In a small saucepan or microwave, melt the butter over medium heat. Add the chocolate and remove from heat. Let sit for a few minutes, then stir until smooth.

In a large bowl beat the eggs, sugar and vanilla for 3-4 minutes, until thick and pale yellow. Add the flour, baking powder and beat until combined.

Put about a third of the batter into another bowl and stir the pumpkin, oil, cinnamon and nutmeg into it. Stir the chocolate mixture into the remaining batter and spread a little more than half of it into the prepared pan. Top with the pumpkin mixture, then drop large spoonfuls of the remaining chocolate mixture on top. Swirl a knife through both to create a swirled effect.

Bake for 30-40 minutes, until just set and starting to pull away from the sides of the pan. 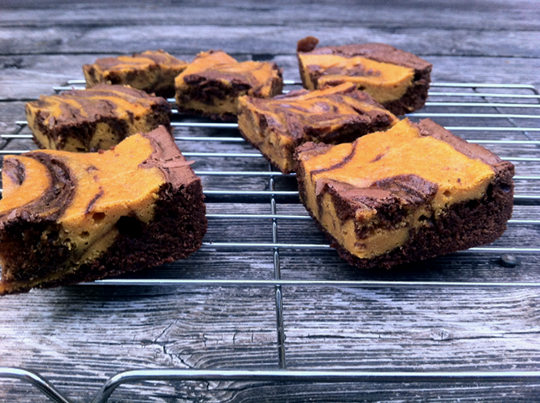 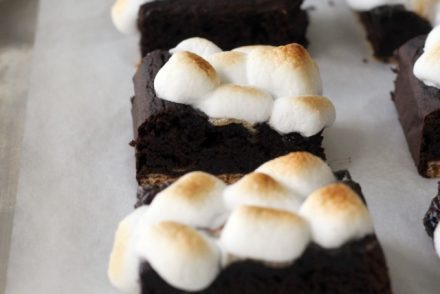